In the real West, an anti-government darling of people like myself apparently feels a nostalgia for the Old South:

In the contemporary South, some pols want a real “Wild West”:
Ga. governor signs ‘guns everywhere’ into law
Larry Copeland and Doug Richards, USA TODAY–April 23, 2014
Arm law-abiding citizens?  I think it would certainly be a good idea here in the mid-Atlantic city of Baltimore:

Associated Press–April 25, 2014
Ukraine crisis: West wants to ‘seize control’ – Russia
BBC–25 April 2014
While everyone in the Mideast always seems to be ginning for a fight:
Israel quits Mideast peace talks in protest

Everyone knows that women shouldn’t drive, vote, or expose so much as an elbow without threatening social comity, so I don’t question the wisdom of this law.  And, of course, Saudis are such good friends of ours.  It’s a pure friendship with no ulterior motives.

But I wish this law would spread like the Arab Spring to places where this kind of carnage is commonplace:

They’re kind of wound up to begin with.

Rodney King himself wouldn’t even suggest getting along in such places.  He’d just be like, “What the fuck, bro?!”

Overheard from a medical student who was reading the news from her dumb phone:  “Shirley Temple was black?”

By Mari Saito and Antoni Slodkowski
“SENDAI, Japan (Reuters) – Seiji Sasa hits the train station in this northern Japanese city before dawn most mornings to prowl for homeless men.

“He isn’t a social worker. He’s a recruiter. The men in Sendai Station are potential laborers that Sasa can dispatch to contractors in Japan’s nuclear disaster zone for a bounty of $100 a head.

“‘This is how labor recruiters like me come in every day,’ Sasa says, as he strides past men sleeping on cardboard and clutching at their coats against the early winter cold.

“It’s also how Japan finds people willing to accept minimum wage for one of the most undesirable jobs in the industrialized world: working on the $35 billion, taxpayer-funded effort to clean up radioactive fallout across an area of northern Japan larger than Hong Kong…”

Swayze, in reality, is chilling on an island with Elvis and Jim Morrison, waiting for their comeback.  Swayze’s ready for a Ghost sequel.

“Large sharks off Western Australia are now doing their part to keep surfers and swimmers safe–by sending tweets warning of their presence.

“Scientists have fitted 320 sharks, many of them great whites, with transmitters that automatically issue warnings to the Surf Life Saving Western Australia’s Twitter feed when the tagged sharks approach within a kilometer of the coast’s popular beaches…”

Because people need to spend more time on the grid.  I fear people don’t use their cell gizmos enough.  Who needs to just chill in nature?

“A white-tailed deer did not survive an encounter with two cheetahs after apparently jumping into their enclosure Friday at the National Zoo, authorities said.

“It was the most recent of the   violent confrontations in the Washington region involving deer, which have been proliferating…”

What is causing so much self-destructive behavior among deer?  (See yesterday’s post.)  Bees and bats have had their die-off crises in recent years, but they’re scary and gross.  Whales and dolphins have their beachings, but their plight is remote to me because I’ve only seen them in person at the aquarium.

Deer, however, were abundant where I grew up.  Perhaps it’s PTSD caused by the pain in the ass of getting shot at and almost hit by cars.  And it must be stressful that this former threat causes such a brief mating act.  (But none of my former lovers has ever attempted suicide.)  Maybe they need a feel-good pick-me-up.  Perhaps an effort to capture them and have all such creatures watch Bambi.  Up until the end, of course.

Or, as last resort, perhaps this chick can help: 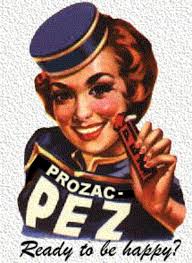